The remains of Sani Dangote, the brother of Africa’s richest man, Aliko Dangote was on Wednesday buried in Kano. A huge crowd converged at the Emir of Kano’s palace where the funeral prayers were held.

Earlier in the day, the remains of Aliko Dangote’s younger brother arrived at the Aminu Kano International Airport. Family members were on the ground to receive his body.

Those who attended the burial include Governor Babagana Zulum of Borno State; Senate President Farouk Lawan, and former Senate President, Bukola Saraki and other dignitaries.

Since his demise, condolence messages have been coming from various leaders across the country.

President Muhammadu Buhari, aside from an earlier call to the Dangote family, also sent a delegation to represent him at the burial of Aliko’s younger brother who died after a protracted illness in the United States.

In a message to Alhaji Aminu Dantata, the Patriarch of the Dantata family, and to the President of the Dangote Group, Aliko, President Buhari described the deceased as an honest business leader with a reputation for integrity.

According to a letter sent through the delegation led by the Minister of Aviation, Senator Hadi Sirika, Buhari said the late Sani Dangote was “an exemplary person who, along with his brother, Aliko demonstrated the power of human spirit and determination.”

He thanked the Dangote family for spreading happiness and giving the country an appreciable identity to the world.

President Buhari equally prayed to Allah to grant fortitude to the Dantata and Dangote families over the loss.

The delegation met Hajiya Mariya Sunusi Dantata, the mother of the Dangote’s, and also consoled the Emir, Alhaji Aminu Ado Bayero, and through him consoled the Emirate Council and the people of Kano.

The delegation was also received by Governor Abdullahi Umar Ganduje who thanked the President for sending a powerful delegation to the burial.

A delegation from the President also attended the burial ceremony held in Kano.

The President of Dangote Group, Alhaji Aliko, and his uncle, Alhaji Aminu Dantata expressed appreciation to the President and prayed in turn for his good health and the success of the administration he leads.

Below are photos if the burial service; 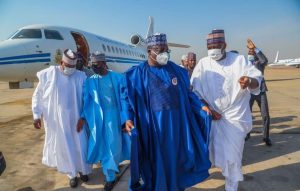 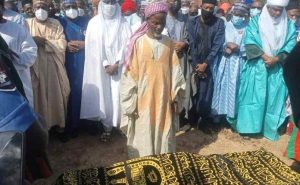 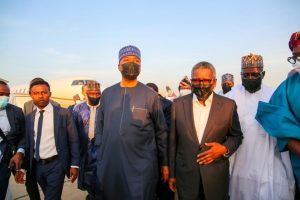 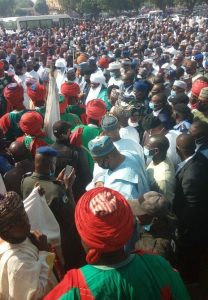